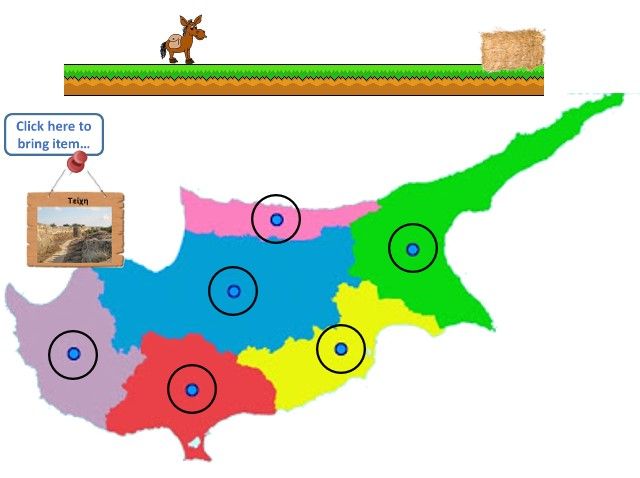 The “The h-Angry Donkey” game has been designed and developed in the framework of the Code RED project, through a dedicated co-design workshops’ series, organised in Limassol (Cyprus) by EuroCy Innovations in 2015.

The objective of the games’ co-design workshops was to engage young people in an interactive (group) process of designing and implementing digital educational games’ prototypes, aiming at paving the way towards adopting these paradigms in the education and skills’ acquisition process, thus maximising the benefit of participants. Eight young students from Limassol, Cyprus, together with three researchers-facilitators had a great opportunity to walk through a process of games’ co-designing.

The game is currently available as a flash and played through Internet browsers. When starting the game, in the first scene, the player is prompt to choose a theme/category (current available categories are the “Beaches” and “Monuments”) by clicking on the plate with the respective name. The donkey then moves towards the selected plate and enters the next seen.

The second scene illustrates a map of Cyprus, with the 6 districts (Nicosia, Limassol, Ammochostos, Larnaca, Kerynia, Paphos) clearly marked with colours and circles in their centres. On the top, the donkey stands at the beginning of a grass-path which leads towards a hay stack. On the top-left, immediately under the grass-path, the player can see a button prompting him/her to click to bring an item in the scene. Items comprise plates with a title and a small image, presenting a specific beach or monument in Cyprus, depending on the category selected in previous stage. The plates are hanging from a pin. The player is expected to identify the Cyprus district where the item is located and drag the item/plate and drop its pin within the circle marking the selected district.  In case, the player made a correct guess, the item will disappear, and the donkey will move one step further towards the say stack. On the other hand, in case of wrong guess, the item remains in the scene for the player to try again, however, the donkey moves one step backwards.

The “The h-Angry Donkey” game is provided under the terms of the EUPL License. Interested game designers/developers may contact us at trainings@eurocyinnovations.com to obtain instructions on how to access the code of the game and modify/distribute/use it as deemed necessary, always adhering to the terms of the license.